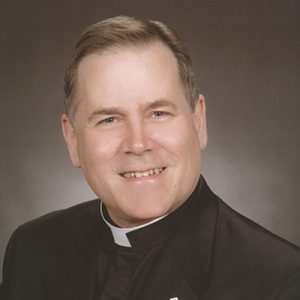 Father Jim was born on July 14th, 1957 in Steubenville, Ohio, the third of seven children born to his parents, Ronald R. Dunfee and Ruth A. Henne. His older siblings are Richard Dunfee and Barbara DeFebbo and his younger siblings are Beth A. Dye, Mary Ann Hardin, Anne Michelle Derham. Another child was born to Ron and Ruth Dunfee, a daughter named Karen Marie who died when she was less than three years old. Karen’s untimely death had the profound effect of a spiritual awakening on the young Jim Dunfee, then 10 years old and an altar server at Holy Family Church in Steubenville, who credits Karen as one of the more significant reasons for his eventual vocation to the priesthood, along with the strong faith of his mother and encouragement from his pastor.

Jim Dunfee attended Holy Rosary Elementary School and is a 1975 alumnus of Catholic Central High School. Discerning the priesthood, he attended St. John Vianney Seminary (closed in 1978) for two years, after which he was sent to the Catholic University of America in Washington, D.C., where he obtained both a bachelor’s and a master’s degree in Philosophy in 1979 and 1980, respectively. A seminarian well on track for the priesthood, Jim Dunfee was then sent to Rome to study Sacred Theology at the Pontifical Gregorian University, where he obtained a STB in 1983 and then an STL in 1985. He was also ordained to the transitional diaconate during his time in Rome and then returned home to Steubenville for his ordination to the priesthood in 1984.

St. Agnes in Mingo Junction is Father Jim’s eighth (and final, God willing) priestly assignment, the others being:

After 35 years of priestly ministry, Father Dunfee reflected on what the priesthood means to him today:

“It means that I must follow Christ heart and mind and soul.  My failures very much have been when I haven’t followed him. Most subjectively, I think, it means I must continually “yield” to Him, continually “surrender” to Him. I am humbled that God has sometimes brought me into very difficult parish contexts and, with his grace, I’ve been an instrument of his healing.”

Grateful for his current assignment, Father frequently describing St. Agnes as “a plum of a parish,” reflecting:

“St. Agnes has been traditionally a very faithful parish with a long history, steeped in the parishioners’ ethnic backgrounds, as well as a parish that has fostered vocations to religious life and the priesthood.  They have had for the most part a very good line of pastors and parochial vicars. I’m grateful to God to be one of its pastors. St. Agnes is immediately welcoming to priests. I’m not alone in experiencing that–many other priests have agreed.”

Given his frequent, self-effacing comments about his propensity to talk at length, Father admits to nonetheless being an introverted person, someone who gets fatigued by being around people too much without time to mentally recharge. In his spare time, he enjoys walking on outdoor trails, watching science fiction movies, and washing and waxing his car (“I work out a lot of stress that way and it does wonders!”). Father has a lifelong love of photography, admits to having a sweet tooth–frequently a source of jokes and comments in his homilies–and has a love of “all things chocolate” as well as lemon desserts.

Father reflects on the role his parents played in his life and vocation to the priesthood:

“The older I get I think I admire my Dad more and more, even though he died back in 1999. I recognize the faults and weaknesses of my parents, having raised me and five others at a time when there was so much change, for the worse, in our society.  They had not been prepared for such changes, with respect to raising children. I also very clearly saw the kinds of sacrifices they made for us. In particular, my mom’s faith and my dad’s sense of service were very inspiring to me.”

When it comes to people who have ministered to Father Jim, personally, he first thinks of Msgr. William Cornelius, who passed away in 2018 and with whom Father was privileged to live with for a period of time. Msgr. Cornelius was a recovering alcoholic who went through the 12 steps of Alcoholics Anonymous, and he described himself for many decades afterward as a “grateful alcoholic.” It was partly through Msgr. Cornelius’ loving and merciful example that Father Jim was drawn to work with and even lead groups like Courage and EnCourage.

Father Jim resides in the rectory attached to St. Agnes Church where he currently enjoys the longest assignment of his priestly career. He regularly visits his mother at the Lancia nursing home in Steubenville and currently maintains office hours at the Diocesan Chancery building where he has been serving as Vicar General since 2018. 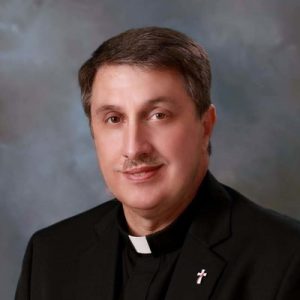 The story of Paul Ward’s journey into the Catholic Church, eventually serving as Deacon at St. Agnes, is full of God’s grace and continual guidance.

Raised in various towns near Rochester, New York by his parents, David and Carol Ward, Deacon Paul was baptized as an infant in the Presbyterian church, though he refers to his childhood religious life as “thoroughly unchurched.” His father passed away when Paul was 11 years old; he has a younger brother, Scott and a half-sister, Shannon, who came from him mother’s second marriage six years later.

Having a profound born-again experience at 16 years old in an evangelical church, Paul was re-baptized in a swimming pool and became a fervent believer and lover of Jesus Christ. Paul learned a trade, mostly to satisfy his parents’ wishes, and became a tool and die maker, with several years of experience working in machine shops. With an ardent desire to serve in ministry, Paul eventually came to study at Elim Bible Institute, where he met his wife, Mary, who had become an Assemblies of God evangelical Christian with her parents after the family had originally been Catholic. Mary and Paul were married after graduating from Elim Bible Institute.

Eventually, Paul became weary of the Pentecostal system of biblical interpretation, especially as he began to notice that every Pentecostal pastor and professor seemed to interpret the bible a little differently, which each claimed authoritative knowledge. He migrated to the United Methodist Church in Maryland where he became licensed as a lay preacher and served as a youth pastor at various local churches. Before undertaking additional theological studies at Roberts Wesleyan College in Rochester, New York, Paul and Mary lived in a Evangelical Christian commune in Pennsylvania for about 12 months. near where Paul and Mary had both grown up.

At Roberts Wesleyan, Paul began to feel again what had become persistent, nagging doubts about Evangelical interpretations of scripture, particularly in matters of scriptural authority. “Who has the authoritative right to interpret scripture?” was a question Paul could not escape. While taking a class on the history of biblical interpretation, Paul was exposed for the first time to Catholic teaching on the subject in a document called Dei Filius from the First Vatican Council in 1870. He invokes the conversion of St. Paul of Tarsus in describing this experience, saying “it was like scales suddenly had fallen from my eyes.” Paul Ward felt a powerful conviction that the Catholic Church was correct in its interpretation of scripture and Christian authority. To add fuel to the fire of conviction, a respected and beloved professor of Paul’s from Elim Bible College days–Professor Morris Smith–had recently become Catholic himself (Morris would eventually become a deacon as well). What was Paul to make of this?

Desiring to become Catholic, Paul still felt an ardent desire to serve in full-time pastoral ministry. Knowing that, as a married man, he would not be eligible for the Catholic priesthood, Paul and Mary came up with a plan: he would become an Episcopalean priest, knowing that he could likely be accepted as a married Catholic priest later on if he first gained Episcopalean holy orders. But as time went on, this began to feel more and more unsavory–it meant Paul and Mary would have to effectively live a lie for roughly seven years. When, at Paul’s confirmation, the Episcopalean bishop remarked in his homily “we know that God is at least three persons,” Paul leaned close to Mary and quietly remarked “we aren’t going to be Episcopalean for very long.”

Fittingly, On January 25, 1992, the Feast of the Conversion of St. Paul, Paul and Mary Ward were received into the Catholic Church.  They came to Steubenville shortly afterward for Paul to study theology at Franciscan University. After earning a Master’s degree, Paul became a Catholic educator, teaching in Catholic schools in South Carolina and Pennsylvania, eventually becoming a school principal.  In an ironic and providential twist, when Paul inquired about any open principal positions within the Steubenville Diocese, the superintendent at the time told him “we don’t have any open principal positions, but I’m retiring, so why don’t you apply for my job?” In 2009, Paul Ward became superintendent of the Diocese of Steubenville’s Catholic Schools.

From 2016 – 2017, Paul Ward was assigned to St. Agnes Church in Mingo Junction as part of his required pastoral work in the pre-diaconate program. In 2017, the newly-ordained Deacon Paul Ward was given St. Agnes as his official diaconate assignment, a specific request Deacon Paul had made to Bishop Monforton, knowing that the parish was a welcoming community with strong faith, a beautiful church, reverent liturgies, and a need for a deacon.

He self-effacingly remarks, “contrary to what it might sound like from my homilies, I’m all about the mercy of God.” He loves a good glass of Kentucky bourbon and has a small woodshop in his garage where he loves to build things. If he had a Saturday completely free of obligations–a virtual impossibility, Deacon Paul admits–he would love to be out metal detecting, searching for treasures. 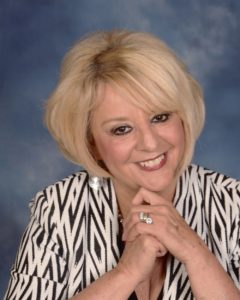 Parish Secretary at St. Agnes since 2019

JoAnn is originally from Weirton, WV, and grew up going to St. Mary’s Byzantine Church and Sacred Heart of Mary Parish, graduating from Weir High School in 1968. She is the youngest of four children of Matthew and Alberta Guzzetta and has three older brothers: Joseph, Matthew, and James Guzzetta. Her husband, Paul D. Babela, is from Mingo Junction, works at Consumers National Bank, and is a longtime member of the St. Agnes parish finance council. JoAnn and Paul have two children: their son, Thomas A. Matthews of Chester, WV is a bladesmith who was the 5th Season champion of the “Forged In Fire” History Channel series; their daughter, Tiffany Grant, lives in Santa Clarita, CA, and is the Director of Training for Signature Travel Network. JoAnn worked in advertising, including as a sales rep for the Herald-Star newspaper, and retired in 2016 from the Weirton Holiday Inn after 20 years there, during which she worked her way up to the position of General Manager.

JoAnn brought her top-notch organizational skills to St. Agnes in 2019. She relates how she became St. Agnes’ church secretary: “It was rather funny how it all worked out.  We were at church one Saturday, and Father Jim said he was looking for a new secretary. My husband pointed to me, Father asked if I was really interested, and I said ‘yes.’” JoAnn loves St. Agnes parish and says it is a warm and friendly community where she always feels welcome.

JoAnn is most proud of her two children and the fact that she ran a multi-million dollar hotel without ever having gone to college. JoAnn loves people, always has a positive attitude, and claims to own approximately 500 pairs of shoes and boots. In her spare time, she loves to crochet, read, and spend time with her family.